The Build It Glyncoch project was funded for five and a half years by The Rank Foundation (2008-2013). It enabled a number of skill-based learning voluntary projects to be introduced into Glyncoch, such as decorating, dealing with environmental issues and wood working projects.

During his time with People & Work, Hywel Williams helped many young people and adults gain work experience, access to training, apprenticeships and employment in the building industry. He also led many community construction and environmental projects in Glyncoch and elsewhere which have had a hugely positive impact on the landscape, communities and on individual lives. Alongside all this activity, Hywel studied for and successfully obtained GCSE maths and English, a level 3 Foundation Studies certificate and then an honours degree in Informal Education (securing a 2:1). Hywel’s professional and personal learning journey typifies what People & Work sets out to do: to equip staff and community members with education and life skills which in turn will influence the lives of others, thus helping to break cyclical poverty. A video outlining the amazing work in Glyncoch can be viewed on our YouTube channel.

Several trainees have gone into college or employment from the project. Most people who have volunteered with Build It have progressed into work, college, training or other volunteering opportunities. It is estimated that around 50 people in Glyncoch have been involved in Build It projects with many more having occasional contacts via Time-Banking opportunities organised in the village (e.g. there is an environmental summer challenge every year which engages all ages).

From October 2013, Build It Glyncoch was known as Build It Together (to emphasise that the work is not confined to one village) and was run on a contract basis. People & Work was fortunate to have a volunteer for three years, David Quinn (known as ‘Digger’), who took on various bespoke projects after Hywel left as a paid freelance worker as and when requested by a range of partners. Most of these projects involved engaging young people in practical skills as a tool to re-engage them in education, training or employment. Digger was mentored in this work by Hywel: they both supported and mentored a number of local young people and helped them gain entry to college, apprenticeships and employment. The Rank Foundation’s motto “a pebble in the pond” was a living reality in Build It Together! In 2015 Built It Together’s work was handed over to a local youth work social enterprise, Go-Connect Wales which employed Digger as a freelance worker and developed an enterprise aspect to the project. The following year, Digger gained employment with the Construction Youth Trust Cymru as their Project Leader, working with vulnerable young people on community construction projects. Hwyel trained as a teacher and is now a construction skills lecturer in Coleg Gwent.

Chance to Learn – funded by Esmee Fairbairn Foundation initially from 2008 to 2011 and then again for a further three years from 2012 to 2015 – worked with community members in all forms of post-16 learning with the object of improving access to and retention within mainstream education and training opportunities. Occasionally this meant the Learning Coordinator running a course to model what is possible but usually the idea was to help other providers (from statutory and third sectors) to survey local needs, recruit and help with progression. The project increased the numbers involved in training and education within Glyncoch three fold over three years with approximately 150 people benefiting from over 400 accreditations in 2011.

The model developed by Sue Barrow during her time as Project Leader formed the basis of our reapplication to EFF for funding to develop the role of a Community Learning Coordinator (Katie Gillett) working in partnership with Glyncoch Regeneration Ltd., the locally based and organised community development company. The four key elements of this role were:-

1. Community learning commissioner – shifting the provision of community learning from a seller’s market – where providers come in, set up a course and invite people to sign up – to a buyer’s market where the community negotiate with providers which courses are needed, at what level, for what length of time and linked to which progression routes;

2. Quality control –  monitoring teaching sessions with participants and reviewing delivery, learner feedback and the suitability of the provision for the learners’ preferred outcomes;

3. Personal coach and mentor – hand-holding, cajoling and encouraging learners to believe that they can try a course, that they should stick with it when things get hard and that they are able to complete it. This involves helping learners not to get derailed as a result of family crises, health problems, financial difficulties or disputes with other learners, as well as helping with studies;

4. Partnership broker and developer – building and maintaining relationships with learning and support providers and facilitating their interaction to develop the quality of provision.

We believe that this model needs further testing and refining in the local setting and then should be promoted as a method of tackling low educational attainment and aspirations.

From 2009 until 2012 School Focused Communities (SFC) worked with five Communities First areas in Rhondda Cynon Taf to build links between the community and schools and to support pupils and their families to get the best they can out of their school years. this work was funded by the Paul Hamlyn Foundation in Glyncoch and Welsh Government match funding in Rhondda. The project sought to encourage, enthuse and excite families and local communities with the life changing possibilities available through education leading to better employment, health and well-being. Schools, communities and families appreciated the project so much it became an integral part of the cluster plans for the Porth and Pontypridd Communities First areas. This model of engagement, which uses an informal educative approach (e.g. youth and play work) to encourage families and communities to make the most out of the opportunities available within formal education (school and college), is something we are sharing with others as a possible way forward to break the cycle of low educational attainment often found in disadvantaged areas.

The Paul Hamlyn Foundation (PHF) funded element followed two year groups from Glyncoch as they progressed through Pontypridd High School and then to decision making after receiving their GCSE results. Andrea Williams (who succeeded Sam Kear as the Project Leader) worked with the pupils and their families providing support to improve attendance, achievement and family involvement in learning. We are extremely grateful that PHF funded the project for a further three years (2012-15) which allowed Andrea to see this cohort of pupils into further education, university, training or employment. The 43 young people being supported are now being tracked through Further Education, training, employment or work experience opportunities as part of a Cardiff University Phd study which seeks to understand how this project impacted on the lives of the cohort of young people and their families. This research will allow People & Work to share the learning from this project in an academic format.

Following the success of this project, People & Work and STAR Communities First in Cardiff have been in partnership with Willows High School (Cardiff) since September 2015 with a project targeting pupil attendance and attainment. The Community Attendance Officer project is also supported by the Paul Hamlyn Foundation

People & Work is extremely grateful for the funding and support provided by the Paul Hamlyn Foundation.

Whilst working with the School Focused Communities project in Rhondda and Glyncoch, Mark Hutton asked if he could use sport as a tool to engage with young people. Mark has a wide range of sports and fitness qualifications and so we agreed that he should use his skills to help young people progress in education and to build up their confidence. Mark, in collaboration with other agencies and team members, used team games, fitness classes, community activities and individual well-being assessments to great effect. This was the first time People & Work had used sport and fitness to engage with young people and their families.

Following the success of this approach, People & Work decided to seek funding to create a community sport and fitness project for Rhondda and Glyncoch as a tool for developing volunteers and community capacity. The main idea was not to run sporting groups for community members but introduce them to sporting opportunities with the ultimate aim of supporting them to organise and run their own community teams and groups. This worked well in both areas and was funded by Comic Relief from 2012 until 2015 (when the project became more focused on young people and started to receive funding from the Rank Foundation). Several individuals, teams and events developed out of Dynamic Communities, including an inter-generational project involving a recently formed girls’ rugby team (who had received Sports Leaders training from Mark) teaching armchair exercises to senior citizens. 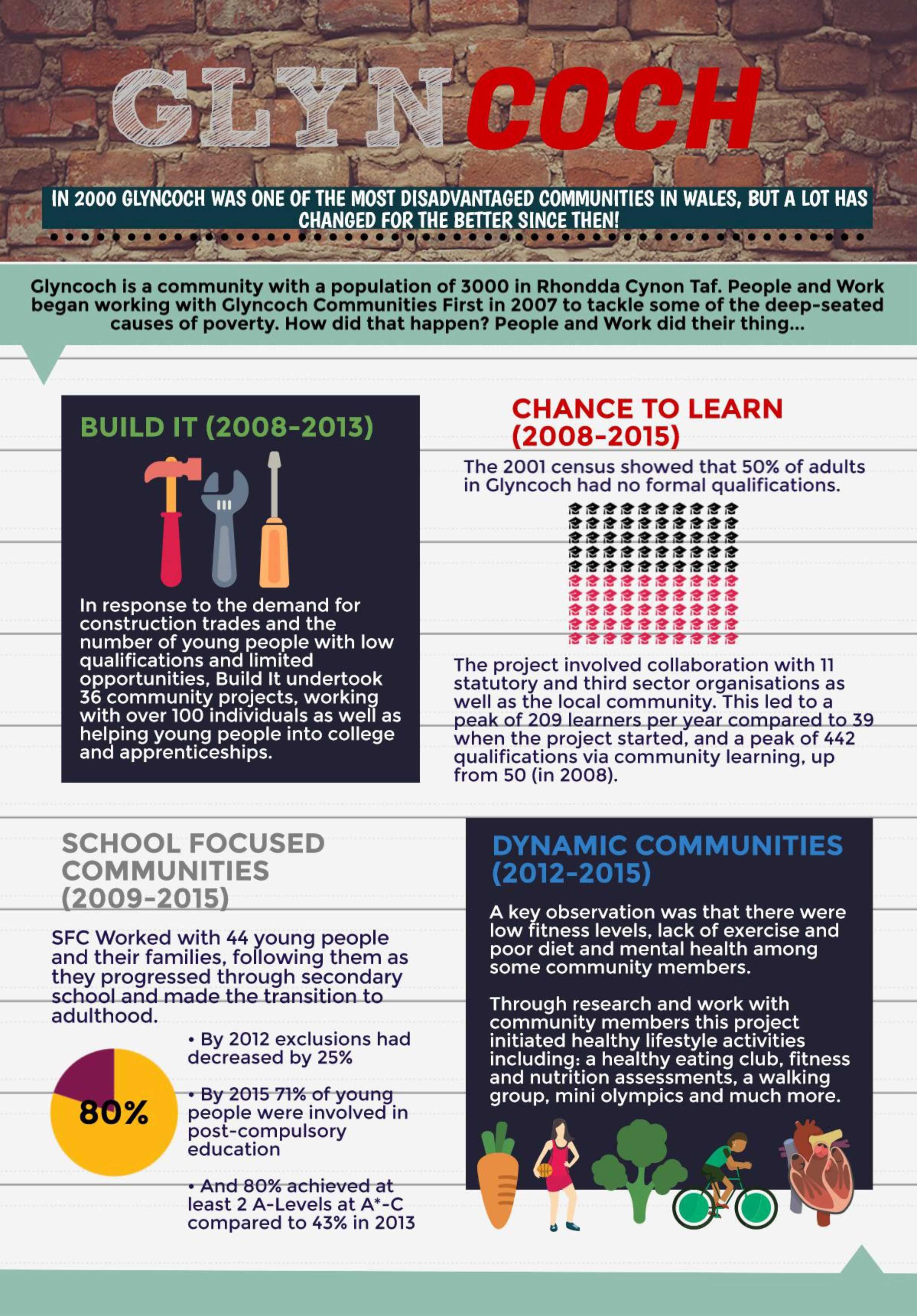 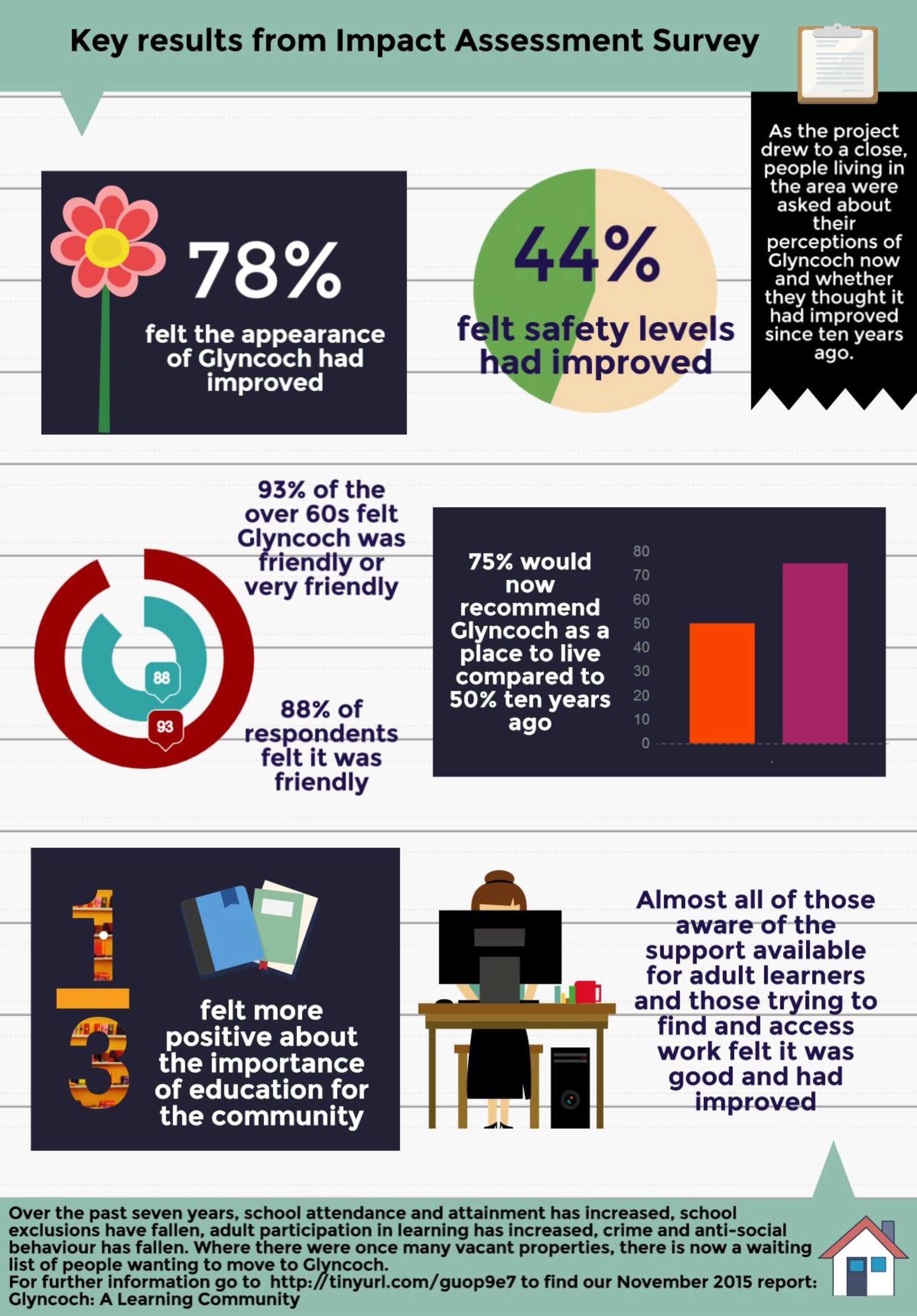